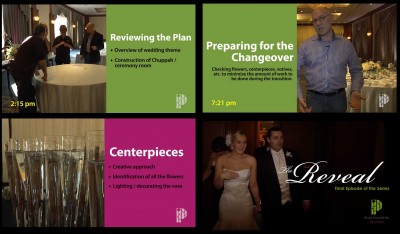 In an effort to keep production costs down, but show all the amazing things that Plantscaping does behind the scenes to add excitement and beauty that really creates the mood of an event, I suggested that we create a series of somewhat ‘reality’ based videos that would show a prospective couple what is actually involved in a setting a room for a ceremony and re-setting a room for a reception…Especially in the case of a rapid ‘1 hour changeover’ complete reset of a banquet room which goes thru a radical transformation in 60 minutes or less.

Well, it took some time, but the idea was finally accepted…then we had to wait for the right event.  And alas, the event came, albeit in winter.  It was a beautiful wedding that took place at the Ritz Carlton Downtown Cleveland.
1 of 4 Behind the Scenes:

In a nutshell, the shooting went just fine.  Lots of work, but some good pre-production planning helped.  But the final verdict was not yet in. The edit still had to take place.  Was I going to be able to pull it off?  I had never tried to blend ‘behind the scene’s’ footage while trying to keep pacing and new and interesting content coming.  In retrospect, now I realize, it was far harder ‘in the edit’ than I had originally anticipated.  I thought that it would be as simple as throwing titles on the front and back and a little music to one long clip of ‘behind the scenes’ footage.  And what I found was that yes, you could do just that, but it would look (if you know what I mean) like that.

Now these videos fall into the category of ‘less is more’ in that if they are too polished they don’t serve the original purpose–to feel like somewhat rough behind the scenes footage.  But again, it took more editing than I thought to get an acceptable look and feel.

We ended with a series of 4 videos give a prospective bride a look of some of the planning, set-up, changeover involved in setting a ceremony and reception room for a wedding.  Yes, it was a risk, in that we didn’t do it before, but I am glad we tried it, but remember I takes alot of editing (maybe a little less if you do good planning)  to shoot a behind the scenes video that keeps a good pace up.  Here are all four of the ‘Behind the Scenes’ of the series:

And finally, here is what a Plantscaping video looks like that is NOT behind the scenes.